We started with a rapid test, using rectangular pieces of poster paper to create a 4-blade windmill. We used straws and a wooden dowel as support for the blades, connecting it directly to the motor. The resulting product generated 0.04 V.

We made a simple straw structure to hold a gear to the motor. The resulting product generated 0.1 V. Unfortunately, we found that the force of the wind bent the blades and changed their pitch, reducing the efficiency of the turbine and the rotation of the motor. 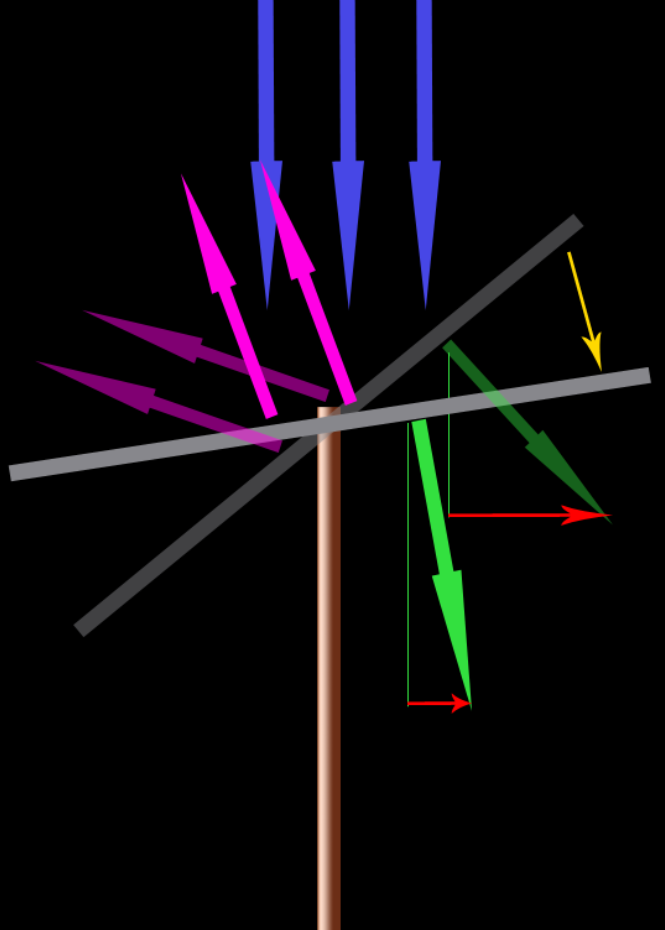 Shown to the left is a diagram of the effect of the wind on the turbine blades and the resulting effect on the turbine's rotation.

We then made our 3-bladed rotor. We took a large gear, measured 120° around it, and glued wooden dowels extending horizontally as support structures for the blades.

For the blades themselves, we decided to cut out semicircular pieces of poster paper and taped them onto the wooden dowels.

At this point, we started to construct a base to hold the motor / rotor assembly. We decided to use plywood sticks because of their durability. We decided to make the structure a tetrahedron, with the front face perpendicular to the ground, so that the rotor blades would not hit the base.

We supported the motor by placing it on a platform within the triangular front face. We decided to use 2 gears to increase the motor's speed. To support the gears, we drilled holes in parts of the plywood and put straws in them to decrease friction.

To further support and align the gears and axles, we glued an additional support in front of the gear assembly, also placing straws as bearings / bushings. This secure structural element ensured that the gears always meshed properly.

To curve the blades and increase efficiency, we attached pieces of string to the edges of the blades.

To mitigate the previous issue where the wind deformed the pitch of the blades, we added smaller wooden dowels to the gear, positioning them so that they prevented the blades from pivoting on their supports.

However, when we tested this design by holding the motor and rotor up to the fan, we found that the rotor did not spin very quickly; as a result, the motor did not generate much voltage.

We thought that the low rotation speed was caused by the wooden dowels being too heavy.

Therefore, we decided to replace the current rotor with a 4-bladed paper "pinwheel" design.

We modified the design by offsetting the vertices of the paper from the center. This modification allowed the force of the air to better align with the plane (plane? Yes, plane) of rotation.

However, when we tested this design, the rotor still spun relatively slowly. This time, we tested the torque of the rotor.

We found that the rotation of the main axle was very powerful, and resisted the friction of our efforts to stop it.

Taking these discoveries into account, we decided to use a compound gear train.

Because of our turbine's modular design, we only had to replace one wooden piece with a longer one that had an extra hole to fit the additional gear axle.

After minimal usage of glue, our turbine was ready to test. This time, the compound gear train converted much of the extra torque to rotational velocity, allowing the electric motor to generate 0.5 V of potential.

The turbine is a conventional horizontal-axis design.

The blades are made using the pinwheel template.

The base is made with plywood.

The maximum voltage generated by the turbine is 0.51 V.

Like full-scale turbines, our prototype has a compound gear train.

Here is a 3d model of the final version of the wind turbine, made using Tinkercad.

Here are some pictures of the final version of the wind turbine. 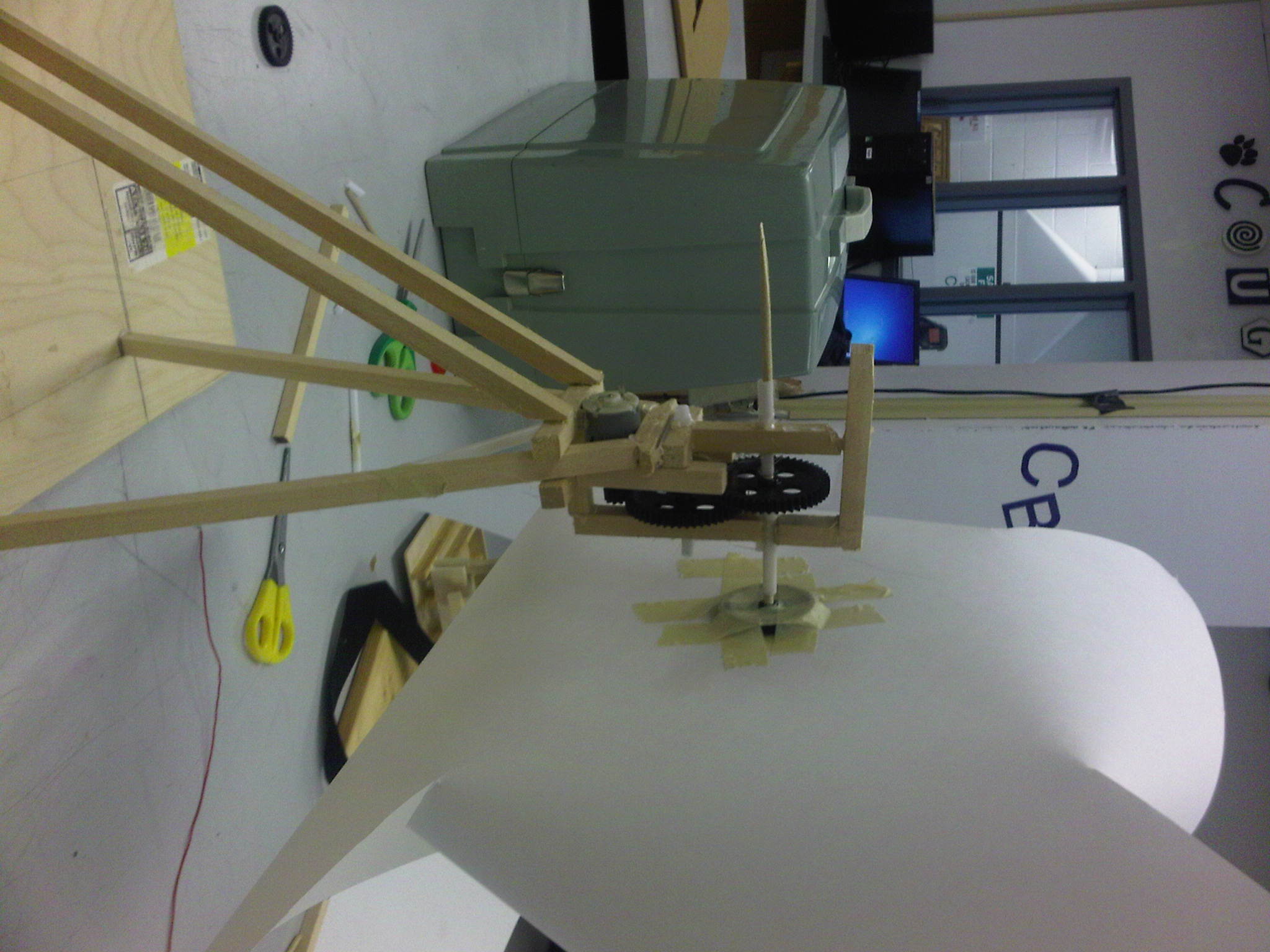 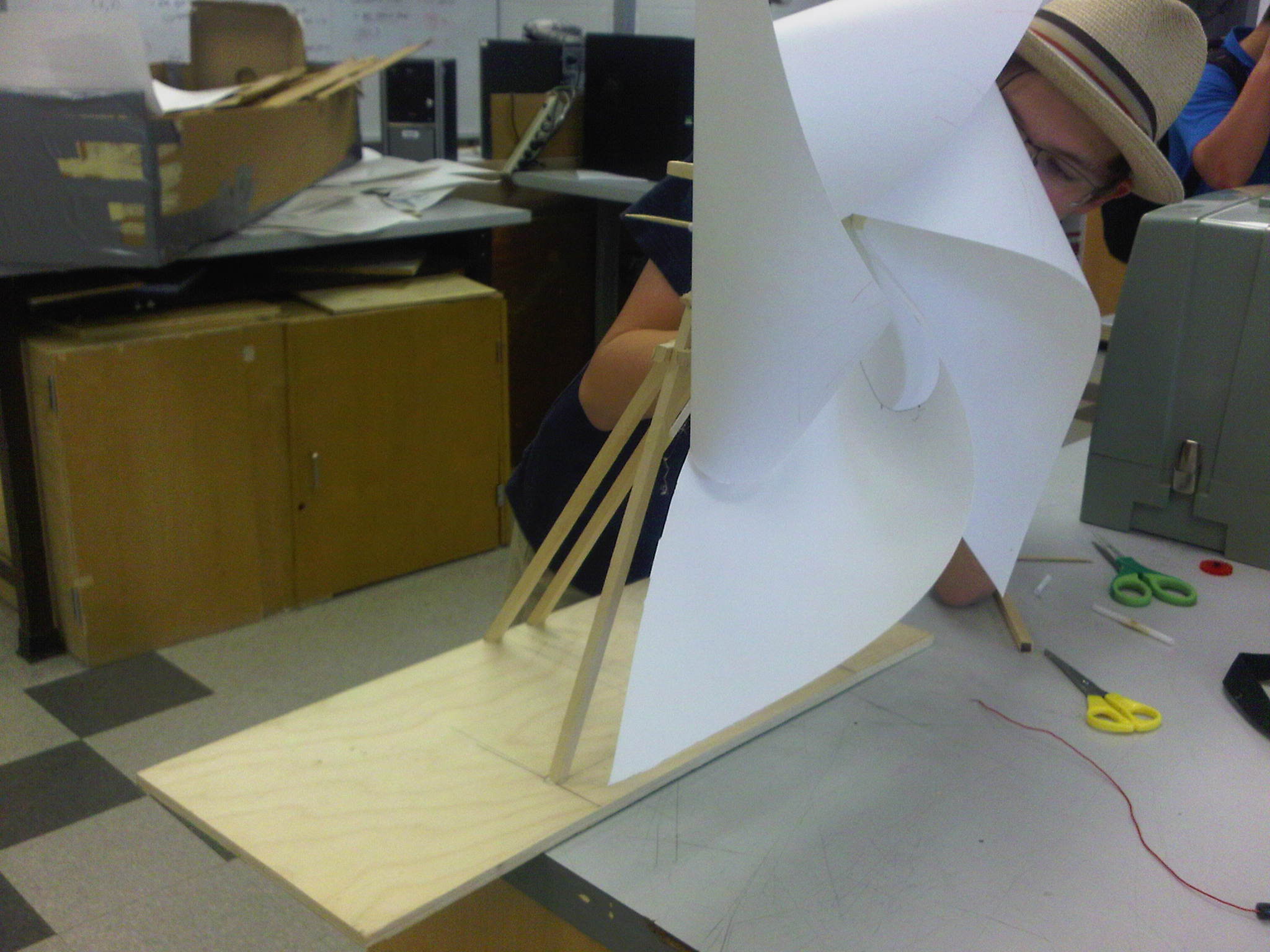 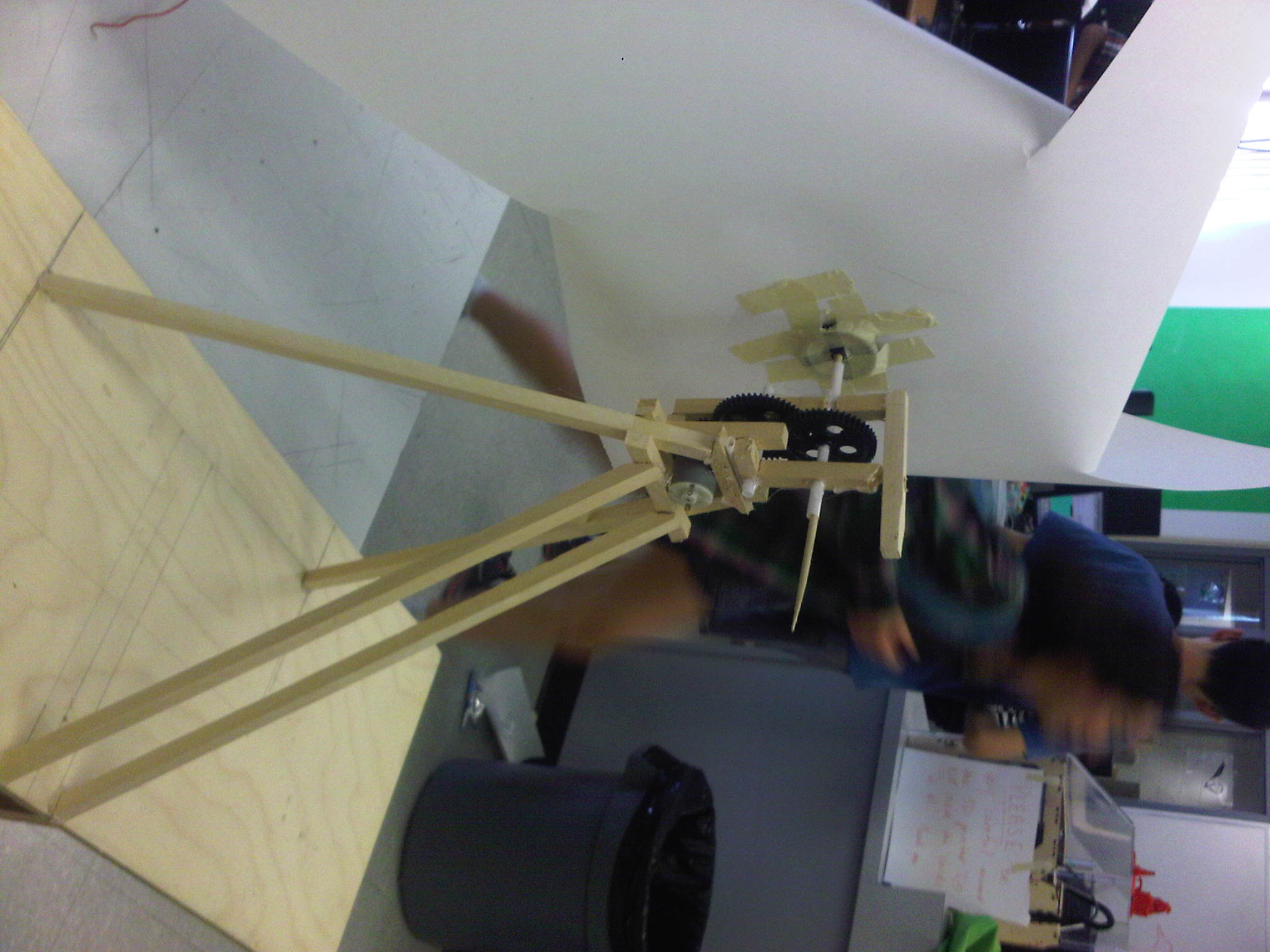